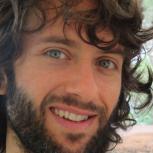 Leonardo Gasparini was born in Castelfranco Veneto (TV), Italy, in 1982. He received the B.S. and M.S. in Telecommunication Engineering from the University of Trento, Italy, in 2004 and 2007, respectively. He received the Ph.D. in Information and Communication Technologies in 2011, from the same institution. During his Ph.D. studies, he worked on the development and metrological characterization of an ultra-low-power WCN node. Since August 2010, he has been with the Fondazione Bruno Kessler, Trento, Italy, as a research scientist working in the Smart Optical Sensors and Interfaces (SOI) group of the Materials and Microsystems Division (CMM), where he is involved in the design of integrated optical sensors fabricated in deep-submicron CMOS technology. In 2011 he also served as a professor of Architecture of Digital Systems at the Department of Computer Science, Free University of Bolzano/Bozen, Italy. His research interests are in the field of integrated image sensors fabricated in deep-submicron CMOS technology, mostly oriented towards time-resolved single-photon applications, including Time-of-Flight LiDAR, quantum and particle physics, fluorescence lifetime imaging microscopy and positron emission tomography. He is a member of the Institute of Electrical and Electronics Engineers (IEEE) since 2010.